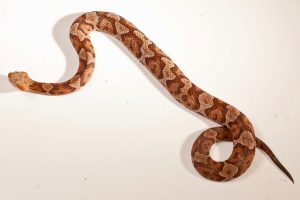 We have confirmation of a copperhead bite on the Blue Trail near the intersection of the White Trail. This is the time of year that copperheads eggs hatch. Please wear high hiking boots and be cautious of your surroundings.

According to the Ohio Department of Natural Resources, “The copperhead is aptly named, gaining its title from the reddish or copper coloration of its head. It is one of three venomous snakes found in Ohio and is the most numerous and most frequently encountered venomous snake. However, even though the copperhead does have the potential to inflict harm, it is like most other snakes—nonaggressive. The copperhead will take a defensive posture only when directly threatened. The bite of a copperhead, while painful and capable of producing severe illness, rarely results in death. The copperhead, as mentioned previously, has a red, copper-colored head, but the rest of its body is shaded differently. The body is pinkish to gray-brown with a dark chestnut-colored hourglass-shaped pattern on the body, and it usually 2-3 feet long. This pattern is narrow on top of the back and wider on portions of the side of the body. Like other venomous snakes, the copperhead has facial pits between its nostrils and eyes and elliptical pupils. The copperhead is not, like many other venomous snakes, a rattlesnake.”

The photo was downloaded from the Ohio Department of Natural Resources website. Visit the ODNR website for more info about copperheads.